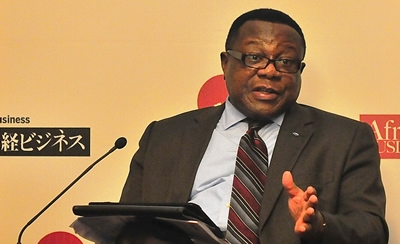 Africa has no choice but to embrace knowledge and create an enabling environment in which innovation will contribute to economic growth, said the African Capacity Building Foundation’s (ACBF) Executive Secretary, Prof. Emmanuel Nnadozie during a panel discussion held on Tuesday at the Africa Japan Business Investment held in Addis Ababa, Ethiopia, 31 August – 2 September.

“In the 1960s, Ghana’s and South Korea’s gross domestic products (GDP) were on par. Fast forward to the 1990s and the Asian country’s GDP was 8 times that of its west African counterpart,” added prof. Nnadozie. “Economists agree that 50% of the growth recorded by South Korea is attributable to knowledge. This clearly shows that if Africa wants to develop, knowledge has to be a part of it.”

Despite the importance of knowledge to economic growth, African leadership is yet to recognize it and to invest resources in it to close the knowledge gap and build a knowledge economy. “For things to change for the better, African leaders need to recognize the importance of knowledge,” said Prof. Nnadozie. “They also need to harness the potential of African youth by transforming the current, inadequate education system into one responsive to the needs of the continent. And special emphasis needs to be put on vocational studies with a view to fostering Africa’s industrialization.”

ACBF has contributed to efforts to build a knowledge economy in Africa over the last 24 years by helping create 35 think tanks that are producing knowledge, which influences policy-making. “Beyond the setting up of think tanks, ACBF has sponsored education programs, such as Masters in Administration, Banking and Finance intended for African policy makers. Graduates of such programs have gone on to work for African central banks and ministries of finance, playing a key role in turning the fortunes of the continent around,” added Prof. Nnadozie.

He also called for African countries to learn from Japan, a country, which has been successful in harnessing its human capital by having and implementing a comprehensive knowledge strategy. “The African leadership needs to take the big role by scaling up investments in innovation, research and development and creating linkages with the real economy.”

However, he urged Japan – the world’s third biggest economy - to increase and diversify its investments in, and trade with, Africa, which are still lagging behind those of other developed nations. “Africa is a growing market for Japanese products, notably automotive, especially with a growing middle class. But most of the vehicles are manufactured in Japan and only shipped to Africa. Having more of the vehicles manufactured in Africa would not only offer jobs but also the much needed transfer of technology, which is critical for creating successful knowledge economies.  Notably, such efforts have started happening.”