Mindset change is a major role for African think tanks 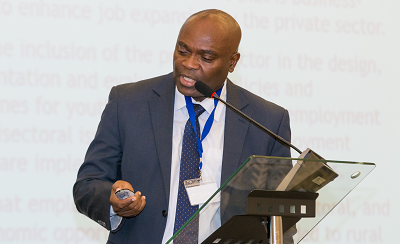 Accra, 6 April, 2018 - African think tanks should tactically change the mindset of African governments to start considering the private sector as collaborators or partners in development instead of competitors.

Speaking on the first day of the 5th Africa Think Tank Summit in Accra, Prof Chinedum Nwajiuba, the Vice-Chancellor of the Alex Ekwueme Federal University at Ndufu-Alike in Nigeria, said think thanks should facilitate such forums for private-public strategic meetings that consider where the nation’s economy should be headed and give incentives to help private companies to get there with youth employment as a major component.

In a kick-off presentation for Plenary Two, which looked at “developing the requisite private sector that can create jobs for the youths”, Prof Nwajiuba made a convincing case for private-public strategic partnerships in Africa by citing the example and good practice of South Korea that used the same model to lift itself from poverty to riches in the last few decades.

The Nigerian don examined what he called “Korea’s strategy in winning the Microwave War” and said the strategy was predicated on investing not just in better technology but in better minds as well.

“Korea had two advantages: low-wage workers and a willingness to wait for a payback,” Prof Nwajiuba explained. “Of course, till now, Africa enjoys these two advantages” but, unlike Korea, from the evidence on the ground so far, not much fruit has been borne by the African advantages apparently because the synergy between the public and private sectors has not been right.

“The Board built industrial parks, subsidized utilities, provided tax rebates for export, and made low-cost loans for investment in selected new products,” the Nigerian academic said.

“The incentives were particularly helpful to big companies like Samsung, whose managers met frequently with government officials, plotting strategy, trading ideas, and discussing projects. This is unlike what is obtainable in Africa where government see the private sector as competitors,” Prof Nwajiuba added.

According to him, Samsung has two most lasting lessons: “First, management by target. Set a goal, then meet it no matter what – even if it means working through the night for a week. Second, always think several years ahead; ask where things will be next decade.”

Prof Nwajiuba said “at the time Samsung’s microwave ovens had the lowest cost in the world, the company was still working on factory automation to make them lower.”

The beauty of the Korean experience, according to the Nigerian don, is that “business and government understood that the country couldn’t depend on low-wage industries for long, not with even cheaper labor in countries next door. Just as the United States had lost thousands of jobs in the apparel industry to Korea, soon, the Koreans knew, they would lose such jobs to Malaysia and China.

“To prepare, the government consulted with companies and developed incentives for investing in new industries. By 1980, the country had gone beyond textiles into steel and ships. Now it was making automobiles. And it had begun moving toward world-class electronics.”

Implying that Samsung’s and the Korean economy’s fast rise to world domination could not have been possible without direct government intervention, Prof Nwajiuba said the participation of the private sector in the design, implementation and evaluation of policies and programs for youth employment is critical for enhancing the relevance of interventions and make them more respondent to labor market requirements.

“Private sector growth is a key engine of job creation,” Prof Nwajiuba argued. “Governments are primarily responsible for creating an enabling environment for employment. The relationship should be complementary (not competitive as may be perceived in some cases).”

And think tanks have a role in this: “They can act as intermediary in the business of ensuring that the private sector adequately plays the afore-mentioned roles,” Prof Nwajiuba said. “Think tanks can also help in identifying the training and general skills required by the private sector and facilitating the inclusion of such training and skills in the education and training system.”

But for companies to create additional jobs, the Nigerian academic said they require an economic environment that is business-friendly, transparent and offers clear and stable conditions.

Prof Nwajiuba finished his presentation on a high note: “A larger and more productive private sector is a necessity if Africa is to create adequate jobs for the younger generation,” he said. “Private sector-led growth must create more and decent employment for Africa’s growing youth population.”

Having spearheaded and robustly coordinated capacity development programs worth over 700 million US dollars across 45 countries and 8 regional economic communities (RECs) in Africa since 1991, ACBF has gathered the requisite experience that makes it the go-to institution for expert knowledge and human resources to advise and support African countries, regional economic communities and institutions on decisive steps to take to develop the practical skills urgently required for the continent’s economic transformation.

Evidence from our cutting-edge work (constituting hundreds of knowledge publications) and the work of several partners show that Africa's development efforts are being hobbled by severe capacity deficits often in the form of shortage of critical skills, deficits in leadership, inhibiting mindsets and weak institutions. The continent’s practical skills shortage is acute in key areas such as Science, Technology, Engineering and Mathematics (STEM) and Agriculture.

At ACBF, we will continue using our unmatched track record in managing financial facilities for development, our vast knowledge gathering experience thanks to the exceptional skills mix of our core staff as well as our strong strategic partnerships and networks to help countries and institutions identify their capacity needs, advise them on how to plug these capacity weaknesses and on where to find the knowledge and resources to develop the requisite capacity resources, effectively use them and retain them to achieve their short and long-term development objectives.

ACBF’s vision is an Africa capable of achieving its own development.

Leverage your own efforts geared towards Africa’s transformation, or

Partner with us by writing to:

B.Kone@acbf-pact.org (to support us with resources for Africa’s Capacity Development)