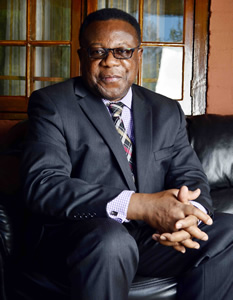 Professor Emmanuel Nnadozie
Prof. Emmanuel Nnadozie, an economist and development expert, became the Executive Secretary of the African Capacity Building Foundation on Dec. 1, 2013. He came from the United Nations Economic Commission for Africa (UNECA) in Addis Ababa where he worked from 2004 to 2012. His last post at the Commission was Director of Macroeconomic Policy Division and Chief Economist. In addition, he was an Adviser to the Executive Secretary of the Commission. Among his major achievements in that role was his successful supervision of the production for four unbroken years of the flagship publication of the Commission, the annual Economic Report on Africa, between 2010 and 2013.

Previously, he was UNECA’s Director of Economic Development and NEPAD Division where he helped to coordinate the assistance of UN agencies to the African Union and its affiliates, including the African Peer Review Mechanism (APRM) and the New Partnership for Africa’s Development (NEPAD). This role has made him a notable figure among African organizations as a dependable ally of the continent.

He joined the UN after a distinguished academic career. He was Professor of Economics at the Truman State University, formerly Northeast Missouri State University, Kirksville, Missouri, in the U.S. from 2002 to 2004. Before then, he was Associate Professor from 1994 to 2002, and Assistant Professor from 1989 to 1994. He served for 12 years as the Director of pre-Doctoral programme at the university until he left in 2004. In addition, he was Visiting Professor at the University of North Carolina at Charlotte from 1996 to 1997.

Prof. Nnadozie obtained both his Bachelor’s degree in 1981 and his Master’s in 1983 in Agricultural Economics, majoring in Finance, from the University of Nigeria, Nsukka, in south eastern Nigeria. He bagged his PhD in Development and International Economics from the University of Paris, Sorbonne in 1987. He worked briefly in France before starting his teaching career in the U.S.

He has many published books to his credit and also contributed to academic journals on topics ranging from trade to finance, African regional integration and economic development.  He is a member of several academic bodies, including the Nigerian Economic Society (NES), African Finance and Economics Association (AFEA), International Academy of E-Business (IEB), the International Academy of African Business and Development (IAABD). He is currently on the editorial board of West Africa Review, a position he has held since 2001. He also edited the Journal of African Finance and Economic Development (1999 – 2002), and served as editorial board member of the Journal of African Development and of the International Review of Science, Technology and Sustainable Development (2003).

In recognition of his outstanding academic achievements, Prof. Nnadozie was inducted into the prestigious Phi Kappa Phi, Pi Delta Phi and Omicron Delta Kappa honour societies. He is fluent in English, French, and his Igbo mother tongue and fairly understands two other Nigerian languages, namely Yoruba and Hausa.