ACBF at the centre of fighting Illicit Financial Flows in Africa 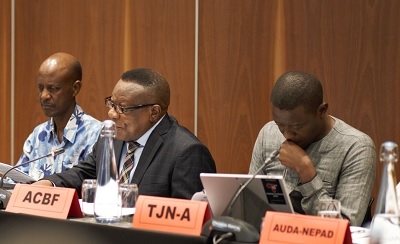 ‘’Institutions are important for a variety of human endeavors including curbing illicit financial flows, given that they constitute the formal and informal rules or norms governing human interactions or behavior,” said Prof Emmanuel Nnadozie, Executive Secretary of the African Capacity Building Foundation (ACBF), the African Union’s specialized agency for capacity building.

”In this sense, building human capacities, and developing the requisite personnel skills is not enough in curbing illicit financial flows in Africa; as long as there are no strong institutions to provide an enabling environment to curb these illicit flow,” said the Executive Secretary.

He was speaking at the meeting of the Consortium to stem Illicit Financial Flows (IFFs) in Africa, which was held in Pretoria South Africa between 11 and 12 December 2019.  .

The Consortium, which is made up of panel members and heads of institutions involved in curbing IFFs from Africa,  is chaired by H.E Thabo Mbeki, the former President for the Republic of South Africa, in his capacity as the head of the African Union’s 10-member High-Level Panel on IFFs.

The Consortium noted that whilst progress is being made in various development facets, Africa’s response to global challenges relating especially to IFFs has not been adequate to significantly address the high levels of vulnerability of people in Africa. If Africa is able to stop, recover and curb illicit flows, gains are likely to be made, provided the recovered resources are channelled to  the critical development areas that require the financing.

There is a general consensus on the importance of capacity building in tackling the challenge of IFFs with a bias on training and skills development. Whilst this is equally important and recognizing the efforts being made to develop top-flight personnel who can detect corrupt activities, recognize illicit financial flows and device better mechanisms to curb such leakages.

ACBF hammered on the need for more investments to be made in building strong institutions that adequately complement the calibre of skilled personnel that Africa is building so that the latter can effectively succeed in combatting IFFs. These institutions include but are not limited to financial intelligence units, anti-fraud agencies, customs and border agencies, revenue agencies, anti-corruption agencies and financial crime agencies. Prof. Nnadozie emphasized on the critical need to build the implementation capacities of these institutions.

Systems to ensure that these institutions are properly governed and have the ability to enforce legislation and regulations as well as modernizing their offices, equipment and ensuring adequate provision of the tools of trade, should be put in place.

ACBF can provide technical support in supporting governments in building such institutions that will effectively live up to their mandate with a focus on inter-institutional cooperation, coherence and coordination. Robust mechanisms for supervision of banks and financial institutions should also be put in place and ensure that there are no loop-holes that promote corruption and IFFs.

ACBF continues to work collaboratively with other partners in the war against illicit financial flows in Africa.