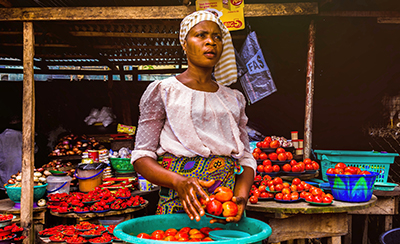 It is a conflict thousands of miles away from many in Africa, but the impact of the Russia-Ukraine war is being felt in the homes of many across the continent.

Many African economies were already grappling with soaring international food, fuel, and fertilizer prices as well as unpredictable weather patterns and COVID-19. The war in Ukraine and the subsequent sanctions on Russia, are stifling food production and trade, causing shortages and price increases globally.

In Africa, the impact has been immediate. The continent now faces a shortage of at least 30 million metric tons of food, especially wheat, maize, and soybeans imported from Russia and Ukraine, according to the African Development Bank (AfDB).

In June, the World Food Programme (WFP) announced that it was cutting food aid to 1.7 million people at risk of starvation in South Sudan. Aid is drying up, at a time food prices are rising, making it harder for WFP to provide food. In 2021, Ukraine was the largest single source of food for the WFP.

In Nigeria, a bag of flour that cost the equivalent of US$37 in 2020 rose to US$60 after the conflict started. The increase was even worse in Sudan, where wheat prices went up by 180% compared to 2021.

These are not mere numbers and statistics. They paint a dire picture about the state of the livelihoods of many people in Africa. They are also a wake-up call for Africa, an urgent call to take more concrete steps away from dependence on food aid and imported food, and to build economies that are resilient and food self-sufficient.

With such dependence on the two countries, a prolonged crisis is a serious risk to food security in Africa. Hence it is important to accelerate efforts towards building Africa’s capacity to grow its own food.

Following the global crisis of 2007-2008, African governments pledged to focus on boosting the capacity of local producer networks. It is now time to put these words into action.

Through its partner networks, the African Capacity Building Foundation (ACBF), has already been working on various programs to support Africa’s farming sectors, with a view to ensuring that Africa eases its dependence on other continents for its food requirements.

The demand for food sufficiency has been noted previously in ACBF’s work on the continent.

In 2014, ACBF assessed the capacity-building priorities of various regional economic communities in Africa. On the need for individual capacity-building, 75% of those surveyed said they need it in the areas of agriculture and food security, industry, and trade.

The Ukraine-Russia conflict must, therefore, be a turning point in Africa’s efforts to ensure food security. ACBF’s work in building the capacity of African agricultural networks, from farmers to markets, is now even more critical than ever.

As the African Union’s Specialized Agency for Capacity Development, ACBF is a repository of the knowledge that the continent needs to work towards food self-sufficiency.

Working with Member States, African institutions, regional economic communities and our partners, ACBF has identified areas of cooperation in the push to build a more resilient African food ecosystem.

First, is the area of legislation. ACBF has, through its work with governments such as Senegal, demonstrated its capacity to support Member States to improve the quality of legislation. To support local supply chains, will need a relook of laws in various countries. One route is through revamping tax systems to make them more favorable to local producers and processors, according to food producers on the continent.

Building human and institutional capacity is one of the ACBF’s key successes.

With more than 60 percent of sub-Saharan Africa population being smallholder farmers, who do not have the resources to reach their full potential, yet contribute up to 70 percent of the food supply, building their capacity, will increase food production on the continent.

This ties in with the Foundation’s work to ensure that such support is targeted and that it reaches the farmers that need it most.

A key measure of Africa’s success in becoming self-reliant will be the success of intra-Africa trade, which will lessen dependence on foreign food supply chains. The African Continental Free Trade Area (AfCFTA) is the vehicle towards this ambition. By providing skills training and support for legislative reforms, ACBF is building capacities in regional economic blocs such as the Common Market for Eastern and Southern Africa (COMESA) and governments to make the AfCFTA a success, which will ultimately.

Among its support to the agricultural sector, ACBF provided start-up grants to women's agricultural cooperatives in Liberia, Malawi, and Rwanda. In each of the countries, women groups were awarded a start-up grant of up to US$5,000 to increase access to much needed capital that would boost their businesses and expand their collective agriculture venture.

In Ethiopia, the Foundation worked with the Ethiopian Development Research Institute in establishing the Ethiopia Commodity Exchange (ECX). The first Exchange provides an organized marketplace, where buyers and sellers come together to trade, assured of quality, quantity, payment, and delivery.

This helped smallholder farmers benefit from the sweat of their hard work, as they could now access markets and get real market value for their produce than when agents would pay them as little as 10 percent of the real market value.

These projects provided a model that can be used to ensure that Africa secures its food supply by building capacity from the ground-up.

As the African Union’s Specialized Agency for Capacity Development, ACBF is well-positioned to play an important role in building the capacity of farmers in Africa to ensure food self-sustenance than depending on food aid and imported food.