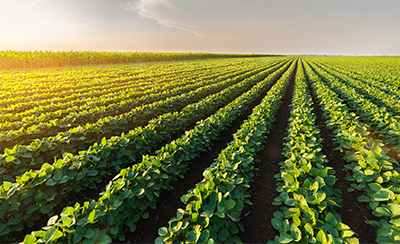 By some estimates, 95 percent of African agriculture depends on rainfall, which is becoming more unpredictable due to climate change. For farmers in Africa, the impact of climate change has driven home the fact that change is needed and needed urgently.

Africa must now focus on climate-proofing its agriculture, by expanding irrigation and building capacity to produce more drought-resistant seed and crops.

Irrigation and innovation lie at the center of building Africa’s food and nutrition security.

According to the Intergovernmental Panel on Climate Change (IPCC), the increased frequency and intensity of extreme weather has reduced food and water security, and this is hindering efforts to meet Sustainable Development Goals.

"Increasing weather and climate extreme events have exposed millions of people to acute food insecurity and reduced water security, with the largest impacts observed in many locations and/or communities in Africa, Asia, Central and South America, Small Islands and the Arctic Jointly," according to IPCC scientists.

In Southern Africa, scientists point out that global warming is happening at twice the global rate. Some countries on the continent have faced recurrent droughts of late, with some receiving the least rainfall in 40 years. The effect of this has been the disruption of food production systems.

According to the Food and Agricultural Organization (FAO), the average agricultural productivity from smallholder farmers in Southern Africa have either stagnated or even decreased to below two metric tons per hectare. This calls for a transition from traditional farming to more innovative and sustainable farming methods to reverse this trend.

By expanding irrigation, African countries can begin to provide their farmers the support they need. More targeted, sustainable means of exploiting are also possible, even for the regions hardest hit by droughts.

In June 2022, the World Bank announced the “Horn of Africa Groundwater Resilience Project”, which aims to exploit the region’s untapped groundwater resources sustainably. The project entails the construction of small-scale irrigation systems with the aim of preventing soil erosion, and sand dams in dry riverbeds. These retail soil moisture during the driest months.

ACBF is also ready to provide support to essential institutions such as water agencies to build the capacities needed for the breakthrough technologies that will allow them to manage water usage better.

A disruption of agriculture is disruption of livelihoods, and economies. Agriculture accounts for about 32 percent of Africa’s gross domestic product and employs more than 60 percent of the continent’s labor force. Subsistence farmers make up the bulk of farmers in Africa, and they account for over 70 percent of output.

This means that interventions on adapting climate smart agriculture must be grassroots-based, a fact that the African Capacity Building Foundation (ACBF), has shown in its work to support various small-scale farmers across the continent.

How can Africa build resilience in the face of global shocks like climate change and conflict? The African Union has already provided direction.

Under the Malabo Declaration, African heads of state declared that, if Africa is to start mitigating against the impact of climate change, 25 million farmers must adopt climate resilient production systems by 2025.

Given its status as the African Union’s Specialized Agency for Capacity Development, ACBF has worked with its partners to build the capacity of African institutions and Member States to develop research capabilities.

The Foundation is implementing the Strengthening African Leadership for Climate Adaptation programme, whose thrust is to improve the performance of organizations working on climate change adaptation for a sustainable climate adaptation ecosystem on the African continent.

The programme will develop and implement customized performance improvement plans to address prioritized capacity challenges of target organizations that are working with poor and vulnerable African communities to develop sustainable and resilient climate adaptation strategies.

This will be key if Africa is to withstand the effects of climate change on food production on the continent.

A report by the African Union Commission in 2021, Seed Sector in Africa: Status Report and Ten-year Action Plan (2020-2030), made a key observation: “At the farm level, yields must increase if surpluses available for trade are to be realized. Current yields of staple cereal crops in Africa are low and near stagnant at around 1 ton/ha for maize, as compared to 4 tons/ha in other developing regions.”

The Report is meant to guide Africa’s agricultural policy.

The changing climate has also brought with it a new menace; it has worsened the spread of some animal diseases. These bring great losses to already vulnerable farmers across Africa, at a time the continent is seeking ways to make its people more food secure. One of the solutions is collaboration in developing measures such as localized development and distribution of vaccines.

ACBF has experienced the benefit of such interventions. Farmers in many parts of Southern and East Africa lose at least one million cattle every year to the East Coast Fever (ECF), a tickborne disease. Working with partners, ACBF has supported the Centre for Ticks and Tick-Borne Diseases (CTTBD) in Malawi to be integrated into the African Union structures, and to become a model for how to improve access to vaccines for farmers.