‘How’ to do it is Africa’s greatest enemy, not ‘what’ to do, says Prof Nnadozie 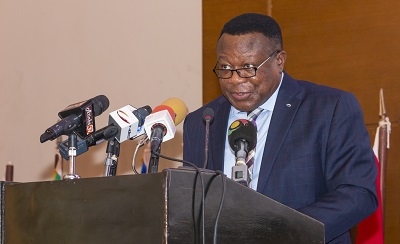 Tackling implementation challenges for Africa’s sustainable development yet again came up as a headline act at the 6th Africa Think Tanks Summit which opened in Nairobi, Kenya, on 24 April. Prof Emmanuel Nnadozie, Executive Secretary for ACBF, again beat the drums of the lack of implementation to alert Africa to the danger of tarrying.

“The problem with Africa’s slow progress is not that Africa does not know ‘what’ to do, rather it lies in not knowing ‘how’ to do it,” Prof. Nnadozie said in his rousing opening speech to the Summit, reminding the well-attended opening day that the ACBF Africa Capacity Reports have had a consistent central message, which is that amidst strong policy environments for capacity, capacity to implement policies remains a major challenge for African countries.

Therefore, the 6th Africa Think Tank Summit, running under the theme “Tackling Implementation Challenges for Africa’s Sustainable Development”, could not have come at a better time as many countries are making efforts to ratify the African Continental Free Trade Area (AfCFTA) which is to be formally launched this July in Niger.

“On the positive side, the AfCFTA has recently received the mandatory 22 ratifications (after Gambia ratified earlier this month) and is now ready for implementation,” Prof Nnadozie said. “However, important agreements such as the AfCFTA, will not take off in Africa if the implementation challenges being faced at national, regional and continental levels are not addressed.”

The Executive Secretary reminded the summit participants of The Digest of OAU-AU Treaties, Conventions and Agreement 1963 to 2014, produced in August 2013 by ACBF, the African Union’s Specialized Agency for Capacity Development, which showed that about 42 treaties or agreements were signed by the OAU and its successor the AU, but only 25 had been ratified by 2014, and worse, with little implementation on any of them.

“Why is it that the continent has lagged to put all these good treaties into action?”, Prof Nnadozie asked, and went on to answer the question himself.

“I will draw an example from the 2017 Report on Capacity Imperatives for Science, Technology and Innovation (STI),” he began. “For the 44 countries surveyed in the Report, 89% had a Strategy for STI or the promotion of STI as part of their National Development Plan. However, such efforts are yet to translate into concrete STI results.

“Despite the existence of STI strategies in most African countries, the status of Africa’s STI capacity on a global scale is still low, with low innovation, low network readiness, low technological readiness, shortage of science researchers, few scientific publications, and low enrolments at universities in STI subjects.

“It is not that countries have no strategies or plans for STI. Indeed, there is also the Science, Technology and Innovation Strategy for Africa (STISA-2024) at continental level, and some existing strategies at regional level, but implementation has been the key challenge.”

According to Prof Nnadozie, what is still in short supply is actualized implementation of these very well-documented and attractive strategies.

The question is then, why have well-crafted plans such as the Lagos Plan of Action and the MDGs as well as the countries’ Visions not successfully implemented? And why have the Plans and Visions not achieved their intended transformational impacts? Even more importantly, how can the continent avoid this to be the case for Agenda 2063 and Agenda 2030?

Explaining why the implementation challenges are becoming intractable, the Executive Secretary said: “At national level, implementation challenges can be associated with the insufficient operational capacity for managing the development process (inadequate institutional and human capacity, loose systems and work processes, and low access to information and knowledge). Countries also face challenges in harmonizing policies.

“At regional level, still in relation to regional integration issues – which I feel is really important for the AfCFTA to be a success - there is slow implementation with most RECs that are facing problems forming or implementing free trade area arrangements; not all RECs have moved enough to guarantee freedom of movement of goods, persons, and services.

“At continental level, implementation challenges can be, among other factors, attributed to the lack of sustainable financing, with a majority of funding coming from donors, limiting the continent’s ability to carry out its reforms and programs.”

Looking at all these challenges and how deep-seated they have become, Prof Nnadozie said the 6th Africa Think Tank Summit had not been convened to only deliberate on the implementation challenges, but rather to a greater extent, proffer solutions to the problem.

As part of the solutions, the Executive Secretary told the audience that for implementation of policies and programs to succeed, the following six things were needed: (1) getting the policies and programs right; (2) creating the enabling environment; (3) having a transformative leadership at all levels and across sectors; (4) ensuring accountability and transparency; (5) making critical financial and non-financial investments, including soft capacities; and (6) taking concrete actions.

Going forward, Prof Nnadozie said: “Given the policy developments in Africa and all the questions raised on why implementation is slow in Africa, the several hundreds of think tanks in Africa can and should play a critical role as organizations designed for, and capable of, long-term thinking and reflection; and be proactive to provide the required practical intellectual insights for Africa to tackle its implementation challenges.”

To support this laudable venture, the Executive Secretary pledged that ACBF, through its five-year strategy, “will position itself to become a constructive partner in promoting policy implementation and transformation, with strategic engagement along the entire policy value chain. It will do so with its member states and with existing and emerging think tanks.”