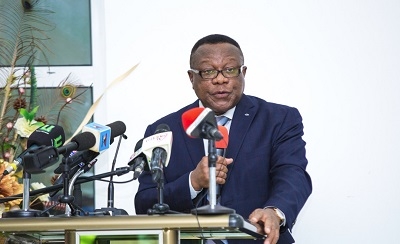 Professor Emmanuel Nnadozie, Executive Secretary of the African Capacity Building Foundation (ACBF), the African Union’s specialised agency for capacity development, has reiterated that the key ingredient for accelerating and maximizing the benefits of regional integration is effective leadership at all implementation levels in various countries.

“Visionary and effective leadership are critical for addressing institutional weaknesses, providing inspiration and clear direction to ensure that decisions are implemented, fostering shared values towards African solidarity and pan-African ethos.

The RIIF 2019 Sanitization Forum provided a platform for participants to discuss the opportunities offered by regional integration, especially the African Continental Free trade Area (AfCFTA), including the capacity requirements for a successful implementation of the Agreement.

The two-day event also enhanced the delegates’ knowledge of the regional integration mechanisms. The event also aimed to increase stakeholders’ interest and commitment to implement regional and continental integration agenda for national development.

Prof Nnadozie commended Ghana on being a champion of African integration and pan-Africanism. He said much had been achieved in advancing integration in Africa as exemplified by the progress being made in the African Continental Free Trade Agreement (AfCFTA).

"Yet, the overall pace of integration is slow mostly because integration’s most critical drivers and enablers—especially strong institutions and effective leadership—have ostensibly not received adequate attention."

He said the AfCFTA was the first agreement of its kind to bring together all African countries under a single Free Trade Area, with a focus on creating a common market for goods, services and investment whilst allowing free movement of persons.

He said estimates by ACBF and the United Nations Economic Commission for Africa (UNECA) showed that the establishment of the AfCFTA would stimulate total African exports by four per cent (USD25.3 billion) and result in an overall 52 per cent (USD34.6 billion) increase in intra-African trade compared to the baseline of no trade reforms in 2022 , with expansion covering a wide range of sectors, including agriculture and agro-processing, industry and services.

The Executive Director said trade in industrial goods was expected to increase by 53 per cent between 2010 and 2022 with AfCFTA expected to cover a market of 1.2 billion people and a gross domestic product (GDP) of $2.5 trillion, being the world’s largest free trade area since the formation of the World Trade Organisation.

Prof Nnadozie said institutions that had not performed optimally in driving integration often had insufficient synergy among them.