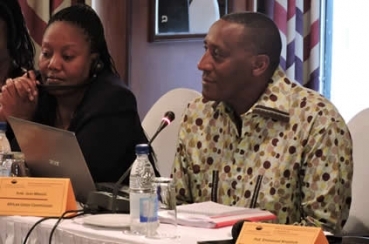 Regional integration is critical to the success of the African Union Agenda 2063 and the post-2015 development agenda and should be prioritized in Africa’s development programs, said African experts meeting at a validation workshop organized by African Capacity Building Foundation (ACBF) in Harare, on 26-27 February.

The workshop, which focused on the second survey of the capacity needs of Africa’s Regional Economic Communities (RECs) and digest of Organization of African Unity and Africa Union (OAU-AU) Treaties, Conventions and Agreements 1963 to 2013, gathered experts drawn from AU Commission, NEPAD Agency, African Development Bank, and representation from RECs. They agreed that capacity gaps at the RECs had to be addressed urgently by African governments.

In his opening remarks, ACBF Executive Secretary, Prof. Emmanuel Nnadozie said the meeting provided a chance to reflect on how to further improve the overall governance of the continent as well as its economic and social integration.  “The AU Agenda 2063 and the post-2015 development agenda represent important landmarks which, used to their full potential, will shape the future of our continent.”

Prof. Nnadozie further noted that regional integration is at the heart of the national and continental development strategies and is considered as a key driver of Africa’s transformation agenda.  “Regional integration is the right strategy for overcoming the constraints of high fragmentation of our economies, widening our skimpy domestic markets and preventing the occurrence of transnational conflicts and threats,” he said.

The aim of the second Capacity Survey of the Regional Economic Communities in Africa is to reappraise the capacity needs of eight African RECs in view of their new strategic thrusts and development imperatives, both current and prospective, and in view of the need to provide  guidance to the key development partners to these RECs in their  programming.

The survey takes into consideration new development priorities and scenarios such as the focus on green economy, inclusive growth, youth employment creation, and increasing role of non-traditional partners such as China and India.

Challenges for successful regional integration include the multiple and overlapping memberships to RECs by countries, reconciliation of national and regional interests, lack of self-ﬁnancing mechanisms for the RECs, paucity of infrastructure, slow implementation of trade integration agenda and most importantly, the lack of capacity.

“There is need for capacity to plan. ACBF’s role should be to produce knowledge to guide the process and encourage partners to do training programs for officers at RECs,” said Prof. Olusanya Ajakaiye, a consultant with ACBF undertaking the survey.

“From the survey, ACBF should identify particular gaps in particular countries so as to get specific technical support that is hands on,” he added.

The capacity of these institutions to deliver on their mandates, take advantage of new opportunities and resolve existing conflicts and challenges will determine the extent to which their member states and the continent make progress in several areas, such as governance and socio-economic development.

According to Prof. Paschal Mihyo, Director of Research and Capacity Building at African Institute for Development Initiatives, there is a need to also establish why Africa is not trading with itself. “Governments must work together to remove trading barriers’ such as road blocks and bureaucracy that hinder trade facilitation between African states.

This second survey will update the first survey done by ACBF between 2005 and 2006. Findings from the 2006 survey led to the formation of the Economic Policy Analysis Unit (EPAU) in the Microeconomic Policy Commission at ECOWAS. It is also expected that findings from the second survey will positively influence the RECs in relation to addressing the capacity gaps they face, being financially self-reliant and in implementing policies towards the achievement of Agenda 2063.

Capacity – the critical enabler for Agenda 2063